The annual Mallow 10 mile road race is coming up on Sunday the 20th of March and entries closed last Friday.

There are 1,375 entries and the master list can be seen HERE

From the organisers...."Please check your own name for your age category and club and if there is any error.  This is important to allow a smooth presentation of prizes.  On the day changes become difficult to manage during prize giving.   This year with 2 team prizes on offer, it's important that people have identified their club to make them eligible for team prizes.  We won’t be able to modify the club on the day.

All numbers will be posted out on Monday so people should expect to get them during the week.   If anybody hasn’t received their number by Tuesday the 15th, they can contact me and I will reissue a new number that can be collected at the help desk.

Remember, there is loads of info up on the race website... https://mallowtenmile.wordpress.com/

Some stats.......
1) 42.8% of the entries are from women which is pretty much in line with most popular 10 road races and half-marathons.

2) Roughly 56% of all entries are members of an athletics club or running group. 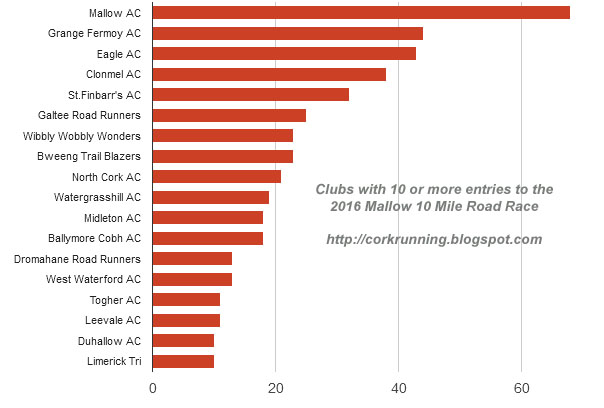 Mallow AC as the host club has the largest number of entries followed by Grange Fermoy AC. Eagle AC is the largest from Cork City while Clonmel AC has an impressive number considering they are over 40 miles away.

4) This is a breakdown of the entries by age (in four year blocks)... 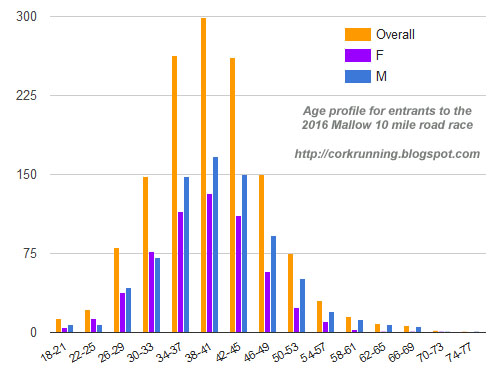 It's important to remember that this chart is for absolute numbers and not percentages. It's also important to note that this is for a 10 mile road race. It might be different for say a 5k which tends to attract a higher percentage of women..

As you can see, the bulk of all entries are between 30 and 49 years old with a peak around 34-45. It's interesting to see that those in their 20's are largely missing. It may not be all that suprising when it probably matches the age profile of most clubs. As shown in this previous post , the growth in club members who are masters (aged 35 and above) has been very strong over the last few years while the number of adults aged 34 and under has been pretty flat.

The chart below shows an averaged out version of the one above... 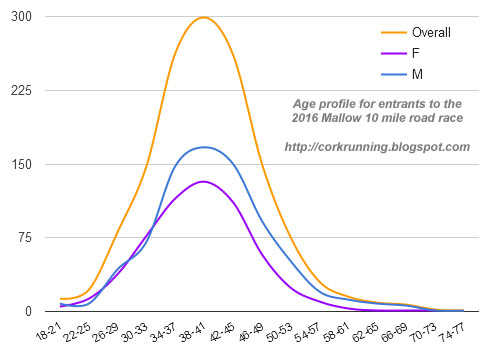 There is one obvious feature from the graphs...

a) As a percentage, there are more women than men in the 22 to 33 year old age bracket. Is it a case that younger men are off playing other sports in their 20's and only take up running when they're older?

Please note that all comments must be moderated before they appear on the site. All spam and nearly anything with a link in it just gets deleted.