All too often when you search through the Internet looking for information on various running related injuries, you will find articles which are ill-informed. It can be very hard to tell what is actually good and what is just pure rubbish.

One of the injuries that a lot of runners suffer from is Plantar Fasciitis which is a very painful condition in the sole of the foot. Paul Cotter is a local runner who has spent months researching the subject, gone through all of the advice and found out for himself what actually works and what doesn't. If you find yourself suffering from this condition then read on. This is good advice from someone who has actually cured the condition. 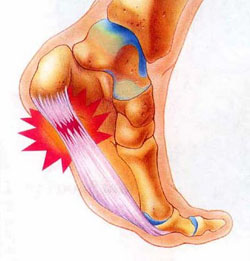 This is a short account of one runner’s struggle with Plantar Fasciitis. I’m not a medic, just a runner who has experienced this problem and overcome it (at least for the moment). My experience may be of some interest to other sufferers. Another, less fancy name for this condition is heel spur, although not really the same thing. Basically Plantar is a pain in the sole of the foot, especially underneath the heel. Anoraks can look this up on Wikipedia, etc., but put simply, Plantar Fasciitis is pain in the heel end of the connective tendons and ligaments which run along the bottom of the foot from the heel to the toes. (See picture) It makes walking, running, and even standing painful, and one of the key diagnostic factors is a sharp pain in the heel when one gets up first thing in the morning when the heel is ‘planted’ on the floor.

It’s not confined to runners, but can affect people who spend a lot of time standing or even overweight people and pregnant ladies. It’s particularly troubling for runners, however, and I know of at least two colleagues who had to give up running entirely because of it, one a fine runner in his thirties. The interesting thing about this injury is how ‘doctors differ and patients die’! In other words, the professionals disagree on treatment. One ‘experts’ treatment is a no-no for another.

I first experienced the condition after a weekend long-run. It was several years ago and I was with a group doing the last 16 miles of the Cork Marathon course as part of pre-marathon training. Towards the end of the run, our noble leader took off and, not one to be bested, I followed. The last third of a mile was therefore done at a sprint. Next morning I could not stand, literally, with the pain in my left foot.

I spent the next couple of weeks checking out the condition online and seeking advice. Having experienced many running injuries in the past, I had by now become good at self-diagnosis and I was usually able to cure myself by doing the right stretch or rolling on the foam roller. The advice I got about Plantar was that the main treatment involved manipulating the foot in several ways. These included working the sore area with my thumb (painful), rolling the sore area on a golfball while standing or sitting (very painful) and doing a stretch while standing up by piling two phone books on the floor and putting my toes up on the edge of them while leaving the heal on the ground. (This is actually an Achilles Tendon stretch.) You can even buy a special cylindrical plastic thing online with sharp knobs sticking out of it to roll your foot over instead of a golfball, I guess there’s one born every day!

Two weeks of this and things were worse than ever. More worryingly, I was beginning to have difficulty walking and even standing, and for me this crossed the line in terms of seriousness. By now I didn’t care if I ever ran again as long as I could go to work without pain. My next move was to visit a GP at my local practice who has a diploma in sports injury therapy. He dismissed the very idea of me having Plantar and told me that I had bruising of the fat pad under my heal, and that it would clear up shortly with a little rest! Needless to say, it didn’t. I then went to a sports injury therapist who manipulated the foot and worked it with his thumb until the pain could not be born further. He reassuringly told me that, if manipulation failed, an injection directly into the heel would probably help, at least until the effects wore off and I could get another.

Needless to say I wasn’t too pleased with this prognosis and fled to the other extreme of the therapy spectrum, to a podiatrist. This man looked on with horror as I told him about my earlier treatments, and assured me that rolling on a golf ball and other forms of manipulation would only make the injury much worse as the affected area was composed of ligaments and tendons and not muscle and therefore that ‘aggressive’ treatments were counter-productive. His answer was to bind up the foot with sticky tape in such a way as to prevent the plantar stretching at all. (See picture) 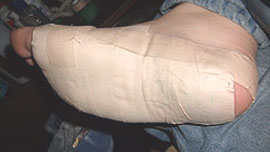 This was maintained for three weeks, during which time I had to re-attend each week for re-binding and wear running shoes all the time to support the arch. Oh, and to do as little walking and standing as possible and absolutely no running! At the end of this the next stage of treatment followed, being measured for orthotics or shoe inserts.

These duly arrived and I had little difficulty with them as I already wore orthotics. The ‘angle’ on these was sharper, however, and with greater arch support then the old pair. These new ones were also quite expensive (around €400). In addition to the orthotics the podiatrist checked my runners and gait for over-pronation or ‘foot roll’, a problem which was thought to be one of the causes of Plantar. It was found that my runners were not part of the problem, having sufficient arch support to prevent over-pronation, especially with the new orthotics which gave further arch support. (I have used the Asics 2000 series for years.)

Another possible cause was tight calf muscles, and indeed in my case I think there was something to this. I was encouraged to do a lot of calf stretching, and what convinced me that this was good was the fact that when I would get up in the morning with a sore heel I found that I could ease this immediately by doing a calf stretch held for 45 seconds repeated two or three times. Here I mean a real calf stretch, the kind that looks like your trying to push over the wall your leaning against. I have since learned that tight calf muscles put an extra strain on the Plantar, and that calf stretching is vital for masters runners both before and after serious training or racing.


After several weeks with the podiatrist, stretching and running with my new orthotics, I found that the pain had eased considerably but had not gone away. If the pain was at 100% at its worst it was now at 30%. I was able to resume easy running without making it worse, but racing, speedwork or long runs were different, and always made the pain a lot worse. This was pretty discouraging and, while the podiatrist’s treatment had certainly improved things, I was still not right. At this stage I was five months out with this injury and desperate to again experience the joy of being able to run fast.

One evening at home while at the computer, I was considering what a running career would be like without racing or training, and was pretty depressed at the thought. Idly, I began searching again for information on Plantar online, not having bothered since going to the podiatrist. Desperation drove me on, and after some considerable time and dozens of websites I found one where scientific claims of a very good outcome to a particular stretch were made. What intrigued me about this stretch was that it was gentle. The point being that most of the treatments and stretches I had come across involved putting full body-weight on the Plantar while stretching, or gouging hell out of the underside of the foot – like the Syrian secret police – or even injecting the heel. I thought to myself that I’d nothing to loose with this new gentle stretch, to which claims of being 80% successful over a three-month trial were being made.

This is what I did: sit in a chair and cross one foot over your other knee. Grab the toes of the foot that’s off the ground and pull them back toward the shin of the same leg until you feel a comfortable stretch (don’t overdo it!). Hold for 15 seconds and repeat 3 times by 3 times per day. I did this everyday for a few months and also kept up the calf, achilles tendon and hamstring stretches as greater flexibility has all sorts of benefits. (See picture)

Within a few weeks of starting this stretch I was feeling better, and within six weeks my pain had almost gone. I got back to running, training and racing, and thought no more about Plantar, apart from being slightly surprised at how easy it had been to ‘heel’ at the end ;o).

Then, early this year, I was out again with a long-run group. We had done the 12 mile route which goes uphill at the start and sharply downhill at the end. A particular young lady nearly half my age who really enjoys being in the front had led the run for most of the way and took off down the hill to the church at a pace. The madness of youth I had once possessed came back fleetingly and I belted down the hill after her, determined to come in first with my long downhill stride. She upped it as she sensed my challenge and I matched this. She upped it again and I matched again. She upped it for a third time and this time I went into overdrive and, absolutely maxing out, passed her and finished first, classically winning the training and not the race.

Getting out of the shower at home an hour later I felt for the first time in a couple of years the dreaded heel pain of Plantar, but this time on the other foot! Over the next few days it developed sharply and back I went to my gentle stretch, three times per day. This time the same thing happened, over a two month period the pain entirely cleared up. I have been free of Planter pain since, touch wood! Maybe I’m just lucky that this stretch works for me, but I do think that a more gentle approach to dealing with Plantar is wise.

The website address where I first found out about the stretch and its efficacy is
http://www.disabled-world.com/health/orthopedics/plantar-fasciitis-stretching.php
John Desmond at Tuesday, December 20, 2011
Share

Please note that all comments must be moderated before they appear on the site. All spam and nearly anything with a link in it just gets deleted.